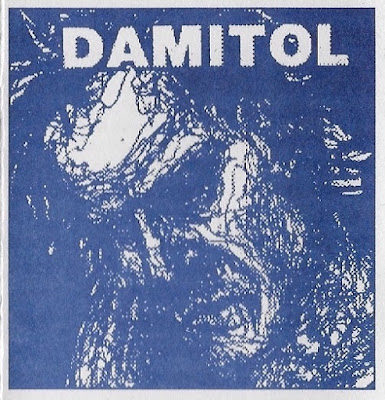 You've probably noticed that I don't really fuck with year end wrap ups or 'best of' nonsense. It's all subjective anyway, and unless you're a professional music critic then your "best" releases of the year are probably going to be the ones you listened to the most, not necessarily the ones that are objectively the best. What have I listened to a lot this month? This DAMITOL tape that Grant gave me a few weeks back. It's the four tracks from the second EP, which would have been they record they were slinging when they played my living room on DeBarr Avenue in Norman, Oklahoma. I don't know if anybody came to the show except my roommate, but I don't know if I told anyone that they were coming. But they played. And it was sweaty. And even though the style here is (really) dated and the vocals are so brutally out of tune, they were playing an advanced technical hardcore that I had never seen before...and they toured with a bag of TVP and we all made dinner in my kitchen and holy shit those are the things that stick with you. So yeah, the new RUDIMENTRY PENI record is monumental, the SLANT 12" is an absolute motherfucker, LINGUA IGNOTA's Sinner Get Ready gives me chills and the ANTIBODIES EP frustratingly titled LP 2021 is flawless....but I'm always going to keep coming back to the sounds that shaped me. While this doesn't mean that my "Best Of The Year" will be the same every year (that would be very boring), it might mean that the experiences in your past help give you the tools, and the context, to truly appreciate your present.
DAMITOL

Good chance that the best sounds of 2022 are going to come from folks like Sewercide, Iron Lung, Warsaw Pact, HIDE, Hair Clinic, and Unlawful Assembly...safe to say I'll be listening to a lot of BORN AGAINST too.
at December 31, 2021