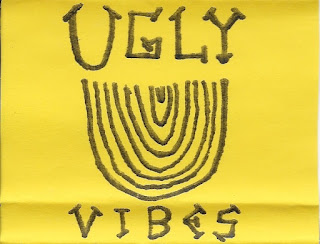 A short and sweet disaster from some South Bay mutants. For most folks, just seeing METH SORES involved should be enough motivation, and gives the listener a pretty good idea of what's in store. Six noisy outsider hardcore stomps from five acts - SOPORS, LOADED WORDS, ADROGYNOUS ELK and FANTASY BAG joining forces with Life Sucker's most notorious export. The sleeper here is "Gary & Me" from ANDROGYNOUS ELK, even though it cuts off at the end of the first side - a powerful '80s Midwest by way of BIG BOYS vibe that stands in stark contrast to the dark and hypnotic one riff monotony of the FANTASYBAG cut that starts the flip side. The whole thing is less than twelve minutes...in/out.
UGLY VIBES
Posted by the wizard at 9:28 AM