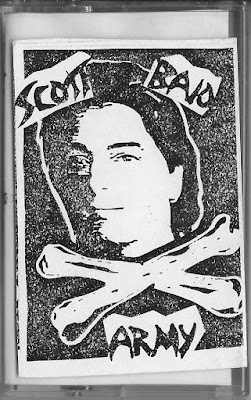 Y'all remember this shit...right? Revisiting Denver's SCOTT BAIO ARMY some 20 years after we first encountered them on our way to ChicagoFest, I swear these dudes got faster while sitting on the shelf. But the thing that really hit me is how fukkn good the riffs are, mingling anxiously with tinny rapid fire drums, shrill vocals and a sharp, raw recording....like so many of the (best) Y2K fastcore relics. They were a chaotic force to see live, and I was pleased that they hit even harder on tape than I remembered. 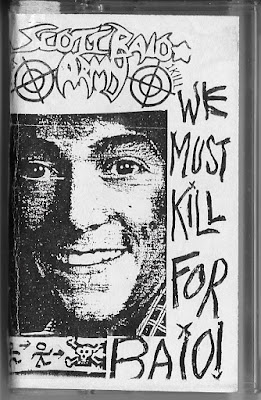 Their run was relatively short - they left a couple of splits in their wake (with THE LUMPS and LINE OF DESCENT), a ripping radio set (from the New Year's Day show at Stanford with CRUCIAL SECTION and WHN?...damn that shit was fun) and an EP collecting the tracks from these two cassettes. That slab bites the cover of the best SUICIDAL record (unpopular opinion), even though the "Possessed To Skate" cover really just sounds like another SBA track by the time they are done with it.

SCOTT BAIO ARMY // WE MUST KILL FOR BAIO!

My goodness! What a great way to start the weekend by downloading these classic tunes. Thanks for sharing and long live Y2K Thrash!!

Thanks! Love these guys