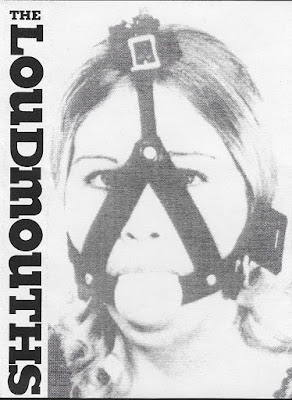 The first show I saw in San Francisco was in 1994, before I had fully moved here from LA. It was in the Western Addition, some bar I never went to or heard of again. BRAIN TRANSPLANTS played - they were brilliant and they were freaks - and Dulcinea and Beth from THE LOUDMOUTHS were at the bar. I know it might seem weird to remember something that random; I had never heard of the band and certainly didn't know the members, but these women and their crew owned that fukkn show. To my small town, small time ass they were fierce and wild and punk as shit - not like the spikes and studs punk, but the don't give a FUCK punks, the kind that is way more punk than the spikes and studs kind. I saw them I don't even know how many times after I moved here, and I always thought that if "garage rock" actually meant this, then I would be a garage rocker for life, because the shows were sweaty and off the damn rails every time. And as good as the shows were, I was pleased to (re)learn that this 25+ year old demo tape swings hard and rocks even harder.

THE LOUDMOUTHS
I ran into Beth at a packed noise show in the Mojave a couple of years ago. I was sitting at the bar between bands and she was buying drinks for her crew. I dunno, I think it's kinda weird but also kinda awesome to say to someone who you know only very peripherally "I remember the first time I saw you. It was a super long time ago and I thought you were a total fucking bad ass." We shot the shit for a bit about SF and about the desert and that was that.
Posted by the wizard at 11:57 AM

We have similar hoistory about that band & my own story of me moving here in 1992. Think they were my first gig here too. Beth is always Beth, & 30 years later she's still as rad as ever. I'm thinking that Western Addition (FUCK NoPA) bar you were thinking of was Brave New World, on Fulton just off Masonic. it was on old black man's blues bar in the front room, & at night they had all kinds of live bands. I saw alot of great gigs there. The City was so much more mall-town then. People said hello & stuff. I'll give this a listen. It's admittedly been hella years. Thanks Wiz.