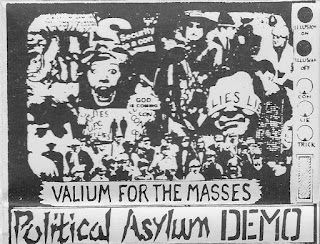 We saw Ramsey in passing last week, cleaning up downed branches and rubbish on the sidewalk in front of his place in Oakland. Said a brief hello from the street and remembered how much we like hanging out with that guy, and that it's been far too long since we have. Vaguely related, POLITICAL ASYLUM stand far far off from the rest of the '80s anarcho bands. They were more melodic, and that was their approach from the start (as opposed to a mellower sound that they "grew" into). On the demos, I feel like they're punching somewhat above their weight by writing songs that they can't quite play ("Apathy" is a perfect example), which is of course a great charm. Likewise with Ramsey's vocals, always out front and confident but often just a touch off. Soft and powerful, those vocals are the instantly distinguishable component to POLITICAL ASYLUM's sound even though the guitars are clearly what puts the band in their own league. I remember Ramsey telling us that they went to see HÜSKER DÜ in 83(?) and focused on Mould's guitar pedals - what they were, how they were EQed - in a failed effort to mimic the sound. The result of all of this was a sound that was theirs....heavier on the leads, protest prose as lyrics, as quietly fierce as they were earnest. Valium For Masses came out in 1984 less than a year after the first demo, with six studio cuts and 36 minutes of live recordings to tide folks over until the release of the Winter EP in 1985. It's good....and you should talk to your friends more often.

VALIUM FOR THE MASSES 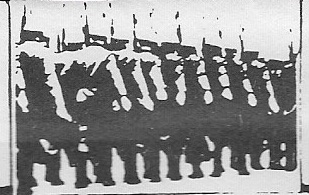