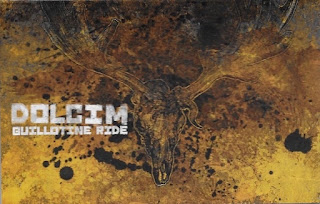 I remember clearly when I picked this up. We stopped by Ebullition on a trip to Los Angeles in 2010 (it's not on the way, no matter how many times I've tried to convince myself it is because driving I-5 is annoying) and I bought a couple of things as we were delivering records. Lisa smirked a little when I told her I had no clue what I was buying while she logged the DOLCIM tape...it just looked vaguely interesting and it was only a few dollars and, well, the compulsion can be strong I suppose. But I'm sure she understood. The tape got misplaced somewhere in the van on that tour and it stayed missing for some years (don't judge me) before it made its way into the house with a box of chud during a recent spring cleaning session. What had been a new release when I acquired it, was added to the shelf as a(n almost) decade old sonic relic from a lived lifetime and an expired scene. And eventually, I listened. Guillotine Ride came to life as one of those recordings that stops you in your tracks - like, you don't even remember what you were doing when you put it on, you just know that you stopped doing whatever it was and you didn't do anything except listen. Until it was finished. The recording is massive and oppressive in its presentation, the quiet parts are few and are your only opportunity to exhale and reload. Steeped in metallic and chaotic European screamo adjacent hardcore bands like ACME and CELEST(e), DOLCIM still draw from their statesmen (I swear I hear Nightmares-era Boatright in the vocals) and use these influences as references instead of blueprints. Like the influences are merely a roadmap to help get them to their destination. Their journey to me was long, and most of it was spent in the dark recesses of a van that leaks too much and is starting to mold on the passenger side headliner...but the vessel was enough, and for that I am grateful. I'm sure you understand.