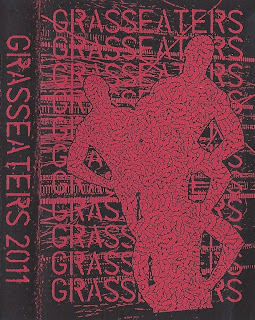 I hated living in Oklahoma, even more in retrospect than I did at the time, but I still retain a strange affinity for my time there. If someone asks where I'm from, I'll say Oklahoma. I lived in Texas first, I've been in California on and off for a decade or more, and I will always keep a piece of myself in Wisconsin...but still I will tell folks that I'm from Oklahoma. And still I hate it. Culturally void, arguably the most socially conservative state in the country, with little to fall back on but a history of white oppression and unemployment. But if I lived in Oklahoma, I would want to be in GRASSEATERS. If they already had a bass player, I would learn to play guitar (realistically, I would just encourage them to kick out their bass player, as the guitar has a lot of strings that I don't understand). Chaotic, forceful, fast, at times nonsensical, but always frustrated and fukkn pissed. This is just good hardcore music - the kind that makes you understand that someone really does get it, that you aren't the only one, that there are other people as completely disenfranchised by life as you are. That's what this tape sounds like.

GRASSEATERS
Posted by the wizard at 5:30 AM

Every band I've heard from Oklahoma has been excellent and Grasseaters is no exception!

Every band you've heard from Oklahoma has been excellent? Weird.

Played with these guys over the summer. They were the best band we played with the entire tour. SO GOOD! Hope they are still playing?
- spencer

Thank you for sharing this. Unfortunately, Grasseaters no longer exists. We're playing our last show next month in Oklahoma City.

We had two records coming out: a 7" on Hip Kid Records (Chicago), and a 7" on Ultrawaste (Milwaukee). We were in the process of writing a third 7" that was intended for Not Normal (Chicago) when we ended the band over somewhat personal differences. To the best of my knowledge, I don't think any of those records will be seeing the light of day.

Here are the songs that were intended for the 7" on Hip Kid (plus a bonus track). These were recorded by Daniel Zeigler (Wiccans, etc.) in Denton, TX and mastered by Mammoth Sound.

The songs for the 7" on Ultrawaste were initially recorded in Chicago, IL by a friend of ours, then completed in Denton, TX with Daniel Zeigler once again (due to our friend sending us .WAVS of the tracks, but no usable mix). However, I was told that Daniel's computer ate shit in the process of mixing our songs -- so those may never be finished.

Again, thank you for the kind words, Robert. It means a lot to know that people cared about this band. Playing punk music in Oklahoma City is a toil in-and-of-itself. Perhaps that is why all of the bands here have such a short lifespan.

The last Bored Straight tour we played with these guys in Oklahoma. They played before us. I'm pretty sure every member of BS was like "oh shit! we have to play after that??" So fucking good. The place was packed too. Fucking blew my mind. Sad to hear you guys are done. This demo is so killer!!!