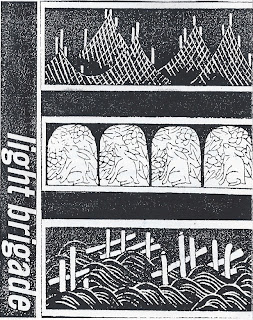 Portland is as known for it's unrelenting walls of bulldozer crust as for it's rainy winters, and the city's ability to effortlessly crank out essential slabs of '80s hardcore punk dates back to...well, to the '80s. Greg Sage and WIPERS land well outside of those lines, and the DEAD MOON/PIERCED ARROWS family have existed in the own world for a few decades now, but The City Of Roses has become synonymous with studded belts and fists raised high praising the sheer power of hardcore punk. If that tunnel vision means that you skip over LIGHT BRIGADE, then you have made a poor decision by not broadening your focus. Ripped right out of the hearts of the Rough Trade roster, these adult kids dish out ethereal post punk with innocently determined female vocals and a guitar that just demands that I listen to DEAD MILKMEN records as soon as I'm done with this tape. A jerky forceful tempo encourages spastic movements not unlike dancing (but not entirely like dancing either). The spaced out drunken vibe of "Monkey" makes it the stand out for my ears, but you should pick your own favorite (might I suggest the lost in the woods jammer "Pebble" as a possible contender).
LIGHT BRIGADE 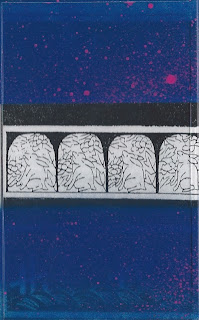 yeah! You beat me to it, but I'm fine with that. I love this tape.

the dead milkmen guitar comparison is spot on - in an awesome way.

This is fucking good, where can I find a hard copy? does anyone know where to contact this band?