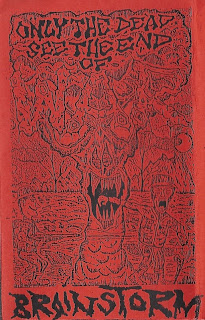 Killer metallic crust punk from Belgrade (now Serbia, then Yugoslavia) most known internationally for their 1993 split with Japan's BATTLE OF DISARM. A churning assault with low throaty vocals and a crisp drum attack rooted in early thrash metal, delivered in 1989 when their country was on the precipice of a brutal and divisive civil war. Regardless of the social and political surroundings (or content) tracks like "Fucked National Conflict" and "Checking Points" are legit burners, charging forth with a raw intensity. The first seven tracks are from the Only The Dead See The End Of War demo (a disturbingly appropriate title) while the following 12 songs are rawer garage specimens. Killer.
ONLY THE DEAD SEE THE END OF WAR
Posted by the wizard at 8:23 AM