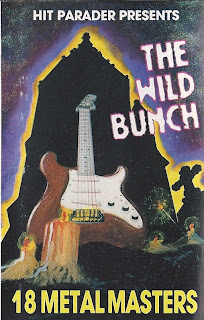 As went the musical tastes of a large part of the underground in the mid '80s, so went the progression of cassette releases from seminal New York label ROIR and, and so goes the chronological presentation of that label's compilations from last week to today. A far cry from the international hardcore assault that was World Class Punk, this week's contribution features some of the filthiest sleaze metal that 1985 had to offer. SHOK PARIS, ANTIX, JAG PANZER, and AGENT STEEL lead a group of second and third tier metallions that share the comp with well worn leaders of the genre like ANTHRAX, POSSESSED, SLAYER and GRIM REAPER. Standout tracks include BLACKLACE's "I Like To Rock" and TEEZE's anthem-that-never-was "Party Hardy" (their self released 12" of proto-POISON cock rock is a certified banger well worth seeking out). Piercing falsettos, amateurish MAIDEN worship and mandatory headbanging will take up the remainder of your day, you have been warned.

OH MY GOD, i remember this comp from when i read metal mags as a kid. you're blowing my mind here. can't wait to listen to this.