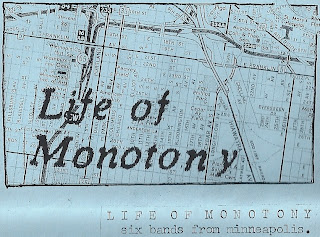 As the title suggests, this 2006 comp feature half a dozen acts from Minneapolis, that bastion of cultural diversity mysteriously plopped in the middle of the great Northern plains. THE AGENDA tracks that start the tape might be my favorites - expertly written and intelligent hardcore punk with hints of Gravity Records styled guitar action, but the whole tape is packed with winners. BABY GUTS are snotty and smart with a singer who reminds me of Ivy (BLACK RAINBOW, MIAMI, LOS CANADIANS), just a little lower on the rasp-o-meter...fierce and deliberate punk. GANGLION inject needed art into the noise/thrash punk thing and create a mess that could easily be mistaken for primitive black metal with its shrieking vocals until meandering riffs and clean guitars compete with the vocals and the listener is left wondering what kind of crazy ride the band is trying to take us on. You've heard surf punk? Well crank up THE MOJO SPLEENS and dig this surf hardcore, motherfukkr - easily the greatest (read: worst) snare sound I have heard in my entire life, I could not make a better sounding snare drum if you paid me, and the songs are excellent. Ripping lo-fi hardcore from FRIENDLY and then the tape wraps up with three riot grrl dreamers with amazing soulful vocals courtesy of DAISY'S COMPACT MICE. As much as I loved THE AGENDA tracks at the start of the tape, these songs have me totally smitten. Insistent and punk as shit, but utterly charming at the same time. Most of these bands have records that are worth seeking out (DAISY'S COMPACT MICE? Anyone...?), and this tape serves as a perfect introduction to the less crusty underbelly of the capital of Midwestern punk. (Don't want to get into a pissing war over this Midwestern punk capital shit, Chicago rules super hard and has an obvious legacy, and Milwaukee will always have a piece of my heart - in addition to having CLITBOYS and PROSECUTORS - but it seemed like the right thing to say when posting a tape from Minneapolis. And besides, they have a LOT of punks living there, and the town ain't all that big, you know?) 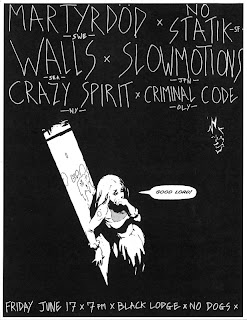 MARTYRDÖD tour with NO STATIK starts today in Seattle. A show with WALLS, SLOWMOTIONS (Tokyo) and a band called CRAZY SPIRIT seems like a pretty nice way to kick things off, yes?

hey robert, thanks for posting this. the bassist of ganglion is angie from question/varix. also same drummer from question in friendly as well as the bass in the agenda. daisys compact mice singer went on to be in a band called permanent vacation, dont know if they released anything.
if youre interested in anything else about this time period in mpls ask! it was fun...

That second Agenda song sounds like The Dicks reincarnated, so good! Thanks for posting this, and Minneapolis is an oasis in the desert of the midwest, great city.

Hey-- I put this tape out! My bud Leonard directed me to this. Thanks for the kind words.

Daisy's Compact Mice were a really great band! They were the first totally awesome teenaged band I saw as a 16 year old punk. Just really inspiring to me. They did a bunch of CD-R releases over the 4-6 years (or so) that they were a band and I'd be more than happy to make duplications.

Yeah well if you were there in 1996 you then had Studio of the Stars, that hardcore fest on the U of M. campus with Los Crudos, Charles Bronson, MK Ultra, all the MPLS Crustcore bands of the day (Code 13, Misery, State of Fear), the straight edge of the day, the token pop/pogo punk (Dillinger Four, I-Spy, Boris the Sprinkler, Blanks 77), Black Fork, Quincy Punx, Bob fuckn Murderer, Stray Bullets, etc.

Nothing topped that summer: what's wrong with you?