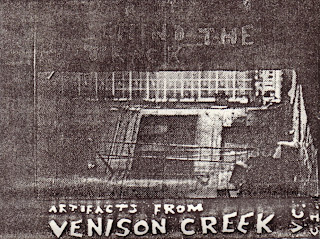 An amazing artifact, this compilation was released in 1983 in a run of a scant 20 copies by a collective of punks from the New Brunswick town of Moncton. Chronicling an incestuous scene that featured musically diverse (and in the context of early '80s North American punk, quite original) bands, Artifacts From Venison Creek starts with the drum/vocal art punk of THE WHORE MOANS (1978), then moves on to killer sloppy Midwestern sounding punks THE ROBINS. The 0.5 McMEGADARES tracks are recorded live (at their only performance), and are probably more akin to early college rock if presented in proper form, but that's just a breather before DEATH CAMP - great angular KBD punks who blow through four live burners, probably my favorite tracks on the tape. HYPERACTIVE ADULTS and VAN KLEEK SOCIETY share a member and both play variations of dreary goth with drum machines and affected guitars, VKS (technically from Toronto, but featuring a Moncton transplant) could easily have polished up their recordings and dished out truly memorable tracks, but they existed for just a few short months in 1982, and these demos are all we get. After a FLIPPER cover from another short lived band (NOTHING), STATE CONTROL and CANCER SOCIETY make their case for status as stars of the tape: ripping hardcore that could easily sit along with sought after gems of lo-fi early '80s HC/punk, though the recordings are live and raw and the attack is a little slower than raging HC fans are probably used to. DAGDA MOR close the tape with catchy art/post-punk tracks that struggle to be discovered through the white hiss of live cymbals. Many of these bands' existence was only a blip on the chronological radar of small town punk (STATE CONTROL started in October 1982 and called it quits in December), and this tape makes up the only recorded output for several of them. Artifacts comes with a ridiculously detailed booklet (hand written and glued, of course) discussing the history of both the bands and scene that surrounded Venison Creek: "Venison Creek formed as an idea in 1978, as an ass kicker to all the glitter and shit of old rock ways." 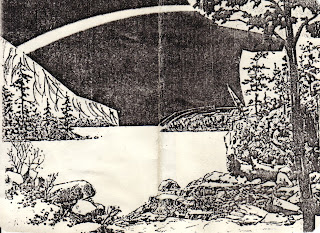