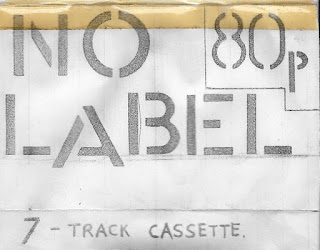 Short lived Swansea (Wales) punks NO LABEL left after this one demo sometime between 1981-83 (depending on which knowledgeable historian you ask or which reliable resource you refer to). Smart second wave UK punk that doesn't really get going until after the anthemic opener "We Gotta Get Together." But when it really does get rolling (on the burner "Let's Get It Right"), NO LABEL deliver a snappy UK82 pogo frenzy with a healthy nod to SUBHUMANS (talking about the bass runs) and a sharp nasty ska tinge on the guitar (talking about "So What's The Fighting For?") - idealistic, primitive and determined in the best senses of all descriptors. As near as I can tell, the tracks from this demo are all that we've got - "Let's Get It Right" made one of the Bullshit Detector comps, and assorted other cuts appeared on a few DIY tape compilations before the rest of the demo was presented on the killer Bullsheep Detector series on AntiSociety in the early 2010s - so I guess punks will be listening to these seven tracks for the next 40ish years.