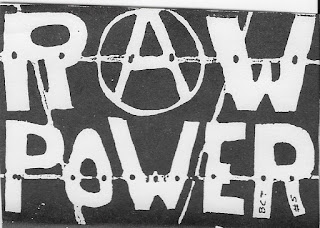 A dub, likely many generations removed from the original, that includes the searing and essential (and much circulated) 1983 demo and the live in Pisa set from the same year that was tacked onto the more common BCT#5 reissue. Track listing from the live set appears to be a bit different, likely a few things just omitted by the limitations of the generational cassette format, and there are three burners from You Are The Victim tacked onto the end. I often feel that if RAW POWER had just called it after Screams From The Gutter, they would be revered as one of the most important and intense hardcore bands in the world...but when you spend years (decades) touring on records that are basically just "pretty good," it might serve to fog up the view in the mirror when folks are looking back. Regardless, these recordings are simply fucking insane. 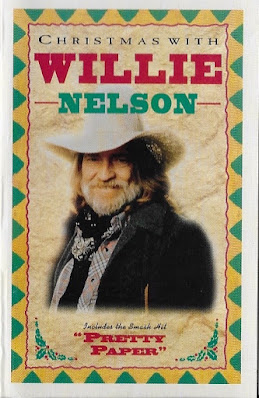 Was in the kitchen last night with Karoline and we were listening to a digital radio station dubiously classified as "new wave." Billy Idol was interviewing Miley Cyrus about their favorite holiday songs and playing pandering insipid drivel from RAMONES, DAMNED and BLINK 182. They did play that POGUES song with Kirsty MacColl, but Idol's "Run Rudolph Run" was more than enough to kill any shred of enjoyment, and that was before BAD RELIGION's embarrassingly straight cover of "Little Town Of Bethlehem" nailed the fun coffin shut. Gratuitous holiday recordings are fucking insulting. This one set me back a quarter, and is easily my least favorite WILLIE NELSON recording. Fortunately, after distorting the hell out of "O Come All Ye Faithful," the tape mercifully gives out a few seconds into "We Wish You A Merry Christmas." Moral of the story is that we should have been bumping punk tapes instead of listening to the radio. Lesson learned (again).
CHRISTMAS
- December 25, 2020