BOOGIE DOWN! ...TO THE WEST BAY BEAT 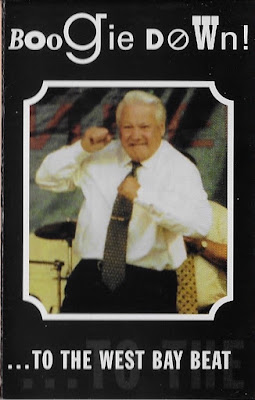 This 1997 Bay Area compilation deserves attention, and context. Curated by two high school students from the Peninsula south of San Francisco, the comp features well know acts as seemingly disparate as THE DONNAS and SPAZZ (to be clear, at the time there weren't more than two degrees of separation between them). They assembled a roster of catchy punk, hardcore, West Bay Koalition bands...just shit they liked as adolescent outsider punk freaks, which is of course what makes compilations great - Boogie Down! listens like a mix tape one might have made for the other. MODEL AMERICAN flows into UNCLE DAD, the fast and catchy ska of SPIES LIKE US rolling right out of the pure teen destruction of THE ELECTROCUTES (decades ahead of their time, this is no doubt the best song on the entire comp). Freaky funkprogpunk from THE DOGFATHER, raw hardcore from PISS WATER, a rare appearance from fellow teenagers HUMAN BEANS and a cut from the guy who owned the record store in town who hosted bands through the '90s. Scene beef historians will notice the inclusion of West Bay OGs SLOBBER and 976 on the same comp - which is noteworthy because it's not the West Bay Koalition 976, but rather the Dory Tourette/HUMAN BEANS adjacent 976 (this might make sense to, like, maybe seven people reading this, and the rest of you will just wonder what I'm talking about...you're going to have to trust that, in retrospect, this is a big deal and only could have been pulled off by a couple of kids), and speaking of West Bay, meet GREMMIES, featuring Frank Ripple (AGENTS, PLUTO, REDACTED, etc) on fucking drums.
BOOGIE DOWN? ...TO THE WEST BAY BEAT 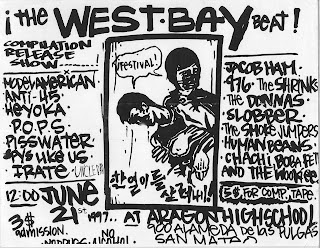 You can't release a comp without having a release show...right? And Dean and Spencer (compilation compilers and release show organizers...they were 14 and 15 years old at the time) pulled no punches with theirs. Many of the bands on the flyer did not play, while several bands not on the flyer (or the tape) did.  FUCKFACE was added to the show as FUNK IN YOUR FACE (why didn't we think of that?!). I mostly just remember Jason from HUMAN BEANS getting naked and jumping in the pool in full view of school officials and us making dark jokes about how much speed we were taking on a high school campus surrounded by kids. Both people responsible for the tape and the show are still very much friends and still very much around...there's a lot to be said for bonding experiences I suppose.
Posted by the wizard at 6:28 AM

Talk about turning the tide on 2020. What a find. WBAD! - Justin Lewis

Everything about this post is 100% solid gold. Area code beefs are the only legit sets there are