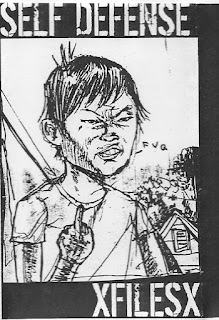 When WHAT HAPPENS NEXT? toured with LIFES HALT in 2001, I met some people and made some friends and made some connections that still hold strong today. It was essentially a bunch of dudes driving around telling fart jokes and throwing food at each other, but it was an incredibly important five weeks for most of us. In Connecticut, we stayed with a fellow named Chris and it was weird but he was a cool cat and we all talked about records a LOT (full disclosure: I had never heard of most of the records he talked about and this might have been the first time I heard the term "killed by death" used as a genre descriptor and not just a series of compilations), then in Providence at our July 4th afternoon show there was a group of dorks there who referred to themselves as the New Bedford Mosh Crew (they had shirts), who went super hard in the basement but then chilled awkwardly on the sidelines at the show in Western Mass when older (rawer) hardcore kids were going harder (full disclosure: we all kinda hated the Western Mass gig, but that shit in Rhode Island was a blast). Anyway, Chris was in SELF DEFENSE, who I crossed paths with a few more times in the '00s. And those New Bedford Mosh Crew kids were part of the scene that gave us XFILESX. So you see, it was a very important time...and this tape that Mick (Room 101 Records, Connecticut, DIALLO, also met on that tour, also haven't seen in years) release is a straight rager - even (especially) released for their tour in 2002 is an essential document of a time that has long since passed. Also, if you like really fast hardcore then I strongly recommend this cassette.

Oh man, you are taking me back! Older ct dude here, can't believe I missed this tour. Chris was a really good dude, I have not seen him in years but for a brief while he ran the label more than a witness... They reissued a couple of very old Connecticut hardcore albums, have heard nothing since. In any case, self-defense was a action point