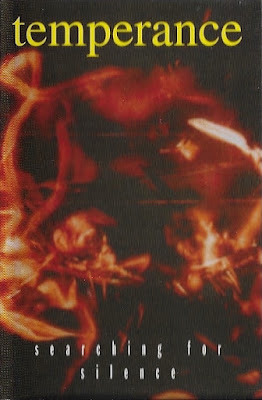 It was a time and a place, I guess. We played with these bands a lot on the first couple of FUCKFACE tours...down tempo, emotive (if not outright emotional) vocals and those lead guitar chords way up on the neck, all with a few chugs to keep them from sounding like straight radio rock. I think I will have an eternal soft spot for this subgenre. It's not a soft spot I am proud of and not one I can explain or justify, but it's a link to that time and that life. TEMPERANCE is an extreme example, nothing more than some guitar squeal between them and BUSH at times, and a vocal delivery that reminds me more of Billy Corgan than anything I would associate with punk and/or underground music. And yet, to throngs of young boys across the northeast....this was hardcore. Searching For Silence came out in 1995, it was the only TEMPERANCE full length after a couple of EPs and then....well, I guess they found the silence they were searching for. No other bands of note, no "ex-TEMPERANCE" on flyers after the turn of the century, no chatter on message boards about Rhode Island's most crucial emo/'core export, just a few tracks and then nothing. 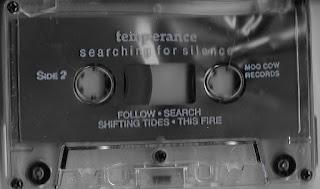 Also - it looks like someone left this tape on their dashboard for a few months in 1996 while they were listening to ALICE IN CHAINS and/or PROPAGANDHI and the thing started to melt. Still sounds fine, but the shell is fukkd and the B-side doesn't play. Completists and the generally curious are welcome to scour the internet for the other four tracks....but I'm telling you they sound pretty much like the first four. I bet Daniel Gatewood loves this band.

I tried to comment on this before. Now I can't remember what I said. But I've gone back and listened to it two more times. Completists can go and listen to the whole thing on the Moo Cow website. And in fact, this was released on vinyl for the first time by Moo Cow a year or two ago. I'm not entirely sure that was necessary. But there you go. It still evokes a time and a place for me. Midwest and Northeast fests and backpacks and emotive teens who just mean it so damn much. And quite honestly, I'd rather listen to a band that's emotional than the 2000th iteration of rote d-beat monotony. Finally, Moo Cow was initially out of Madison, and also put out stuff by Cable, Disembodied, Cave In and more. This release isn't out of place. Have a nice day.