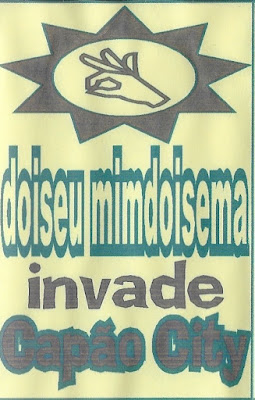 There's a lot to unpack here. So much that DOISEU MIMDOISEMA almost come off like a piss-take, trying to see if you can swallow all of these pills at the same time. There's irreverent and feisty punk, sounds that would have sounded appropriate in any number of regional micro-scenes in the '90s, and it feels like this is the base camp from which these Brasilians start their excursions. But what about the lazy and comically dreamy "Espatifada," or the psychedelic freestyle funk/rap "Epilético?" These aren't tracks that come off like a band trying to make a joke, they sound like a band who are genuinely all over the damn place - "Chamegro Latrino" is an endearing bass/drum/keyboard track, the smooth 311-demo-by-way-of-the-Caribbean "Entre a Oferta e a Procura" and there's an untitled closer that sounds like an actual teenage garage band from 1995. Which is perhaps exactly what DOISEU MIMDOISEMA were....there were no rules, no internet models to follow, creativity mingled with concepts (however bizarre) and ideas were explored. Nothing was by the book, because we were (all) still writing the book. Maybe things were better then, and hopefully there are always more chapters in the distance.

DOISEA MIMDOISEMA INVADE CAPÃO CITY
Posted by the wizard at 6:53 AM

I know the band and the members, it was a magic generation in the gaucho music scene, at the same time there were Walverdes, Crushers, Graforréia Xilharmônica, Colarinhos Caóticos and many others. What an unforgettable time. Can go blindfolded, worth a lot.