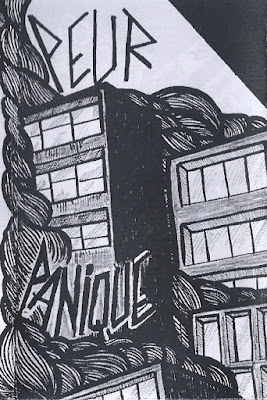 I shared the 2011 demo a while back, but I think that France's PEUR PANIQUE got better after I did. The 61 seconds of "Gachis Permanent" sets the stage (and kinda validates the existence of fast hardcore), and the remaining baker's dozen tracks just keep on settling the score. Ferocious, blistering fastcore/PV with slow riffs that will bring you to your knees (or incite you to mosh the shit out of your bedroom). That 2011 demo takes up eight tracks, and the remaining six bangers (and they are basically all bangers) seem to come from two separate sessions...shit man, I don't care when they recorded them, I'm just happy that they did. It's worth noting that "A Quois Tu Penses?" has a sick Tragicore vibe absent from the rest of the tape...but mostly I just want More French Fastcore!

The song "à quoi tu penses?" is actually a Daymare cover, an early/mid-00's band from Bordeaux with a strong down-tuned Tragedy feel, which accounts for it sounding quite different to the other songs on the tape.