IS THIS INTEGRITY OR STUPIDITY? 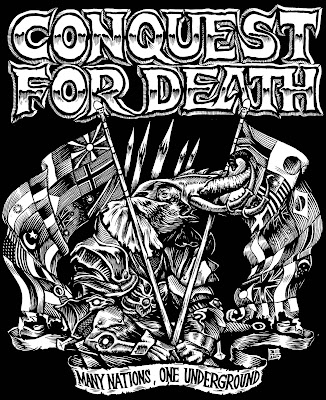 Obviously this post is a departure from the typical fare a you find on Terminal Escape, but this is a special thing. In April 2015, my band CONQUEST FOR DEATH went on a three week tour of Mongolia, China, South Korea and Japan. We've been to Japan twice before, and played one show in Guangzhou in 2008 (just a town in Guangdong province with a population of 13 million people...that no one in the US has ever heard of), but all of the these other stops were new to us. Through some friends (hi Craig) we met some friends (hi Brian) who work on a thing called Rock Naadam, and through those friends we met Javkha of Art Ger Entertainment. Javkha and Tuvshin followed us around Ulaan Bataar and Darkhan with cameras....and then Javkha made a fucking music video. So if you ever thought to yourself, "I wonder what the guy who does that blog looks like when he's drinking a beer with a vulture perched on his arm?" then now is your chance, punk. Seriously though, the tour was incredible, and the week we spent in Mongolia was utterly unforgettable...especially since it's on youtube now. Cheers to Chachy and Brian for making it happen, cheers to Paul for joining us, cheers to Javkha and Tuvshin for documenting it (and for being rad), and cheers to some of my oldest friends in this fucking circus of a band. More punk tapes as scheduled, don't worry, but here's the video in the meantime:

IS THIS INTEGRITY OR SUPIDITY?
ROCK 'N ROLL'S A LOSER'S GAME...AND WE'RE WINNING!

The Wizard On A Horse

Love your blog and all the time and effort that you put in. I'm going to make a conscious effort to check out your band... You are among the last of a dying breed and there are people out here on the interwebs that appreciate logging onto your site every day and seeing what you're sharing with the world... If you ever find yourself down Florida way, I will surely come to your show and say Hi... Cheers My Friend.