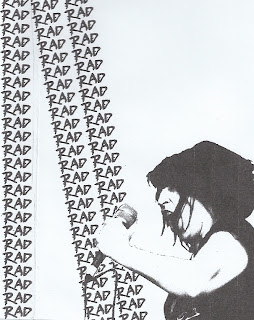 Maybe I should have included the This Is Not A Final War demo when I was shoving Bay Area's finest into your earholes, but I forgot. Sometimes I make mistakes. Sacramento's RAD do not make mistakes on this demo, they just thrash. Bratty and infectious female fronted fastcore mania of the highest caliber, RAD rip through 11 songs in less than four and a half minutes, and there is not a second wasted. Sometimes "Creepout Crew" leaves a bit to be desired, but I think the song is a bit tongue in cheek so I'll give it a pass...but every other second on this tape is nothing short of magic. I'm ashamed to tell you how many times I have blasted the shit of this while pumping fists and raging the shit out of an invisible guitar while sitting on the Terminal Escape Throne (a dumpstered office chair that constantly wants to roll down an uneven concrete incline into a dumpstered desk, in case you were wondering), so instead I'll tell you that RAD take '80s USHC a la 7 SECONDS and YOUTH BRIGADE and ram it into a time and place translator to give it DS-13 and TOTAL FURY energy...and then they play it faster. Like a LOT faster. This is awesome and this is addictive - you have been warned.

THIS IS IS NOT A FINAL WAR
Posted by the wizard at 5:00 AM

oh my god this rips so hard!

Listening to this and then their "Loud & Fast" tape, I must say it's hard to choose which I like best. I'm leaning towards this because is deliciously raw . For the sake of argument, I'm simply going to say RAD is rad either way.