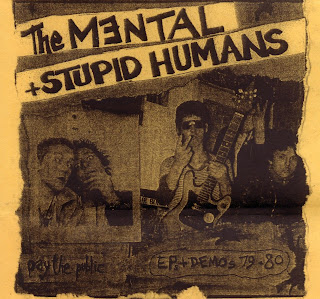 I know it's not really a compilation, but this split cassette features a pre-SUBHUMANS Dick (vocals for THE MENTAL) and Bruce (guitars for STUPID HUMANS) and since the tour starts today, its seemed fitting to bend the rules just a touch. The eight MENTAL tracks compile 1979's Extended Play EP and the Kill The Hostages EP recorded the following year, but not released on wax until the Demo Tapes label reissued both recordings on one excellent LP. The STUPID HUMANS songs (originally released on Bluurg as a cassette) will sound familiar to most of you, since Bruce took them along when SUBHUMANS began, and here you can listen to "Society," "All Gone Dead" and a score more classic SUBHUMANS songs - but slower and with another person singing. A little confusing for your average superfan, but the second wave of UK punk just doesn't get any better than it does when done by these chaps, and I look forward to spending the next three weeks with them.

We start tonight in New York City...find the rest of the US tour dates here, and stop by and say hello (apologies to the Southeast and Northwest). I'll have my re-issue of this cassette (as well as a few early live SUBHUMANS tapes) in tow, along with new the new VACCUUM demo (the old one too), the NO STATIK 12" and 45 on cassette, and the OPT OUT demo.

amazing stuff! own the lp and the tape

where can i buy it?

email the guy who does this blog.