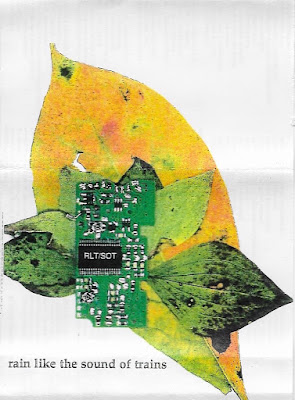 If you were around in the '90s, then you likely heard this band's name from time to time. It was a weird name, so it kinda stuck in my head even though I never (consciously) heard them until I was gifted this demo from a Midwestern friend a few years ago. I suppose that mentally I had filed this with the most self indulgent segment of the basement emo/DIY set....but I was wrong. It's like BLIND MELON, full on funky second wave alternative radio rock that could have shared a stage with MOTHER LOVE BONE. And these were punks? Apparently yes, RAIN LIKE THE SOUND OF TRAINS was a punk band. I'm not a purist, any casual visitor should know that, and I absolutely have an affinity for non-hardcore in both general and comprehensive terms - but GIVE sound like SISTER DOUBLE HAPPINESS but not as good (reminder that SDH has but a scant few tracks...and that's a generous assessment), TURNSTILE sound like 311 playing yahtzee while listening to the bad HATEBREED records....and RAIN LIKE THE SOUND OF TRAINS? It's just bad frat funk. I saw "this band" playing covers dozens of times on Frat Row in Norman, Oklahoma in the early '90s, injecting some "much needed" groove into EAGLES tracks and really feeling that TEMPLE OF THE DOG jam that was all over the radio (before the bros discovered PEARL JAM, of course). I'm digressing and projecting a bit here, but it's only because I care. I care....and I just don't understand. I should have never listened...you should listen though, because I want to know if I'm wrong. But I just wish I could turn back the clock and make this tape go away.

RAIN LIKE THE SOUND OF TRAINS
Posted by the wizard at 7:02 AM

Email ThisBlogThis!Share to TwitterShare to FacebookShare to Pinterest
Labels: Washington

Kalamazoo was party to more than a few emo-funkytroversies. RHCp tats in the scene, the acceptance of Knee Deep Shag opening for Sideshow back in '91, slap-funk Deconstructions...