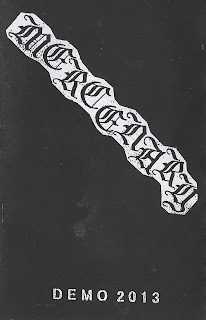 Just fukkn killer bombastic hardcore punk. Unbridled ferocity, and while they might lean on a few of the trappings of new millennium noise punk, they stand strong on the strength of their songs. In other words: this shit rules and would arguably be just as good if there was no reverb on the vocals and the guitarist didn't have a phaser pedal. "No Uniform" is so gorgeously relentless, and the drum fill that starts at 0:45? That's the shit that we listen to music for.  If TALK IS POISON started a raw punk band and had a teenage singer then I like to think they would sound like MERCENARY. This rules.

DEMO 2013
When looking on the internets for some interesting fodder related to this tape (I do that for your benefit...you're welcome) I hit the fukkn motherload. Apparently some dude from MERCENARY is the son of Kevin Kinney from DRIVIN' N CRYIN' who I feel like I saw in Norman, Oklahoma about twice a year while I lived there (and I remember them being insanely loud) and who I still jam from time to time. But what's even weirder is that Scavenger Of Death bothered to mention the Kevin Kinney connection because he was in the seminal Milwaukee band THE PROSECUTORS, whose EP is an absolute stunner and impossible to find. Scavenger Of Death reissued that record this past summer (probably because they are bros with the dude from MERCENARY whose dad was, like, in a really rad punk band a long time ago). Anyway, shit is weird so listen to this superb tape today and then order yourself a hard copy while you are getting that PROSECUTORS single, which is really good. You need it. Seriously. Would I lie?

what's your address? i wanna send you a tape! thanks.

We are playing with them. Stoked.

Find my email address in the right column please.