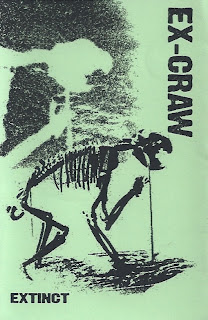 As good as the fast shit is (and it's very good, I assure you), the melancholy "Death Of Truth," with it's subtle guitar leads borrowed from early '80s LA and vocals that have the time to dish out the power that the rest of the demo might gloss over in favor of speed, really makes Extinct invaluable. Maybe it's the juxtaposition of this mid tempo track against the all-out multi vocal attack of the other sixteen tracks, or it might be simply that the fast shit is killer and that one particular song is also killer...either way this 2011 burner from the most isolated metropolitan city on earth has been getting a lot of listens at Casa de Escape.
EXTINCT
Posted by the wizard at 5:00 AM

oI! Are you interested in making a trade? I got a few copies of Diskobra (Hungarian D-beat) and the Konkurssi Demo (Tampere Disorder-hardcore). Would be awesome to send some tapes overseas! Make noise!
_ Daniel

Fucking awesome band ! You should check out their previous band, The Craw. They released a couple things before becoming Ex-Craw. The Craw - Hard Cunts Demo (2009), and Primitive Thrash split with Death Grenade, who I also recommend !