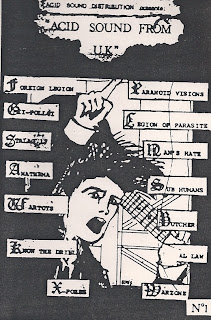 I've been sitting on this one for quite a while, years literally, because I didn't have the track listing and I din't want to seem like a moron by misnaming a BUTCHER track as ANATHEMA or some shit. So I put it on the backburner until last week when I pulled it out to have another listen...and fukk man, I don't give a shit who these songs were performed by because you need them. In case your eyes are bad, Acid Sound From United Kingdom (vol. 1) features FOREIGN LEGION, OI POLLOI, STALAG 17, ANATHEMA, WARTOYS, SUBHUMANS, X-POZEZ, PARANOID VISIONS, WARZONE, BUTCHER and two bands whose names I cannot decipher since the cover seems to be an octogenerational photocopy. Two songs each...lots of dark gothy shits, plenty of rousing fist in the air moments and an investigative adventure for those up to the  challenge. Favorite tracks: A3, B11, A5, B9, A8, B7, B6, A13 - and yeah, B13 and B14 are the same song, go figure. Now let's see if there was ever a second volume!!
ACID SOUND FROM UNITED KINGDOM
Posted by the wizard at 5:00 AM

From what I can read off the scan: Know The Drill, Legion Of Parasites, Man's Hate and probably Martial Law.

Great Tape... Thanks
Here's an attempt at a tracklist, a few of the bands (Man's Hate & Know The Drill) I'm unfamiliar with so I guess they'll be the missing titles.
Also despite the cover I don't recognise the Butcher tracks and there is no Political Asylum but Martial Law featured some of their members. Here goes...

Hopefully someone can fill in the blanks!
Cheers. Jock

There's a great song by KNOW THE DRILL on the "Who? What? Why? When? Where?" comp on Mortarhate - I lways wondered who they were and if they had more material, I even put that song on a lot of mix tapes over the tears. But it's hard to tell if the mystery tracks on here are them.
Anyways, thanks for finally sharing this, it's a really cool comp!

So i guess the rest is Know The Drill?