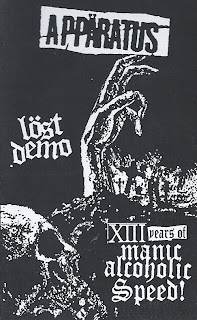 A subtle but significant tweak on the raw DBeat paradigm, this anniversary demo (13 fukkn years!) from Malaysia's APPÄRATUS is nine minutes of raw mutilating insanity. The only time this shit lets up is one high end tinged MOTORHEAD influenced number, but they launch right back into raging DISCHARGE by way of Sweden on the last track...and the "this is the end" chorus seals the deal (as if there was any doubt left). Blistering.

You can probably get this through Hammercharge, and (in case you still need convincing) APPÄRATUS feature ATOMIC DEATH members. So there you go.