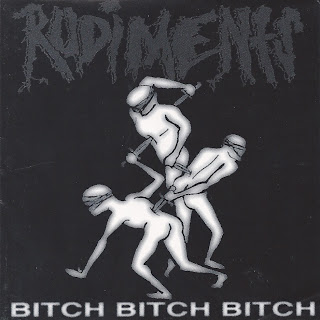 RUDIMENTS were well established before I moved to San Francisco, but I was lucky enough to watch their evolution into a terrifying whirlwind of narcotics and punk. If you are scared of ska, then perhaps you should stay away, but 1996's Bitch Bitch Bitch is a mandatory release filled with chaos and drug fueled depression...everything from the blazing sinister '80s hardcore of "Neon Crucifix" and "El Camino" to the chilled out "Underwater" or the unquestionably danceable "Terror In The Heartland," tracks that could teach fans of the dirty ska/punk from more well known bands a lesson or two in the ways of determination in the face of squalor. The recording is damaged in the manner of later FLAG or a distorted basement amalgamation of Albini's work, and that edge gives songs like "Superhero Chickenshit" an authenticity that is impossible to manufacture. They toured relentlessly for half a decade, exporting Mission District ethos to the heartland of the country for $50/night, sharing the stage with much more popular and less worthy bands. Their live shows in the late '90s were epic, and while few of their other releases capture the final era of RUDIMENTS, this full length definitely does. 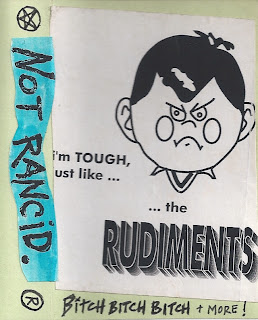 Scottzy made me this tape before the LP came out, and I played the shit out of it. The LP on one side and a slew of demos and live tracks dating back to 1994 on the flip. The RHQ 4-track recording of "Smokin' Hubbas" might steal the whole tape for me, but you are welcome to choose your own favorite. Had some of the best times with these dudes - cared about stuff a lot less back then but, in retrospect, perhaps it meant a lot more. 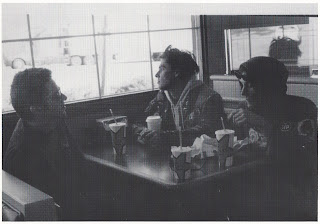 "They comfort my buns, they keep me, you know, supported and able to be endowed to do what I do...which is, you know, get high."
Posted by the wizard at 6:58 AM

I remember seeing them at the Fireside in the 90s. When I did listen to ska, the Rudiments were definitely one of my faves. I'm really looking forward to this!

Or maybe it was at the Metro? I am sure I saw them in Chicago in the early 90s. Smokin' Hubbas is great. Wailing Paddle was a always good little dance number as well as Spoon.

My 1st show was at the Trocadero in SF:
Skankin Pickle
Janitors Against Apartheid
The Rudiments

Thanks for posting this!

This is great! Got any Faggz recordings?

Oh man. Just finding this now and so bummed the link is down. Would kill to hear some of these demos! Rudiments are one of my undying loves and Bitch Bitch Bitch remains the record which has influenced my life the most. Is there any way for me to get this tape recording from you?! Any word would be so appreciated beyond belief. piratecat4 at gmail is my handle!

I had that Faggz tape but have no idea where it went. It was so good, if anyone reads this has it, please let me know.