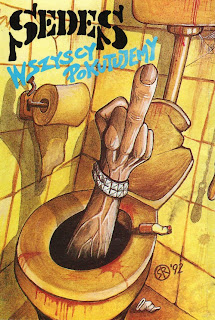 SEDES were one of the earliest Polish punk bands, starting to play around 1980/81 and after several lineup changes they called it quits in '85. The band was reassembled by the vocalist in 1991, and this tape release followed the next year while the membership continued to (r)evolve. I posted a few SEDES songs on a Polish mix tape last year, live tracks probably from the Jarocin festival in '84, that are predictably more primitive than these studio tracks - "Swinie" still comes off as perfect Eastern punk when given the proper treatment here, while the title track sounds far too slick. SEDES kicked around throughout the '90s, still switching members often, and cranked out a few more full lengths. Cheers to Matt from finding this on The Machine and letting me share it here. 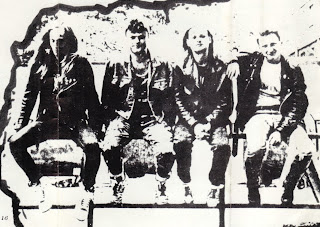 Reformed Sedes in the 90's were total shit. Their music has gained nickname "punko-polo" (as paraphrase to disco-polo, a shitty, primitive version of disco music listened by rustic rednecks). Although in the 90's they have gained significiant ground among the kids, most of the older listeners were simply disgusted by oafish music of "new" Sedes. It was millions miles away from their golden days in the early 80's. If anybody wants to hear a "true" Sedes, I recommend blog "Kaseta Stilon Gorzów C-60"

I do love Sedes, but agree this slicker production loses something. I also like Klinika who do a pretty rockin' cover of Wszyscy Pokutujemy on their Karate Pogo 7". Although I am not an old timer from Poland so not sure if Klinika are considered "cool" or not. And yes, check out "Kaseta Stilon Gorzow C-60". Super cool stuff and super obscure.

Peter's comment is all true - Sedes in the 90s were the symbol of the worst watered down and commodified shit sold as "punk" to kids with no real knowledge of of what real punk is about. Can't stand this shit (well, to be honest it's sometimes played for a good laugh among my friends), despite loving the old Sedes...