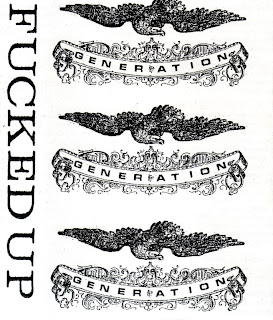 A brilliant idea, executed to near perfection. Toronto's FUCKED UP are probably well known to most of you as a band who released a few killer EPs, followed them up with a confusing but still pretty darn good double LP, and then parlayed their self generated hype machine into a bizarre form of mainstream credibility and what is shaping up to be a wholly uninteresting catalog of recorded material on Matador and Vice. But before they dove headfirst into their own hooplah and started making yawn inducing records, FUCKED UP released this mix tape to entertain listeners, debut some songs that were new to those not lucky enough to have seen the band live (I've seen them only once, in 2004 in Chicago, and I was kinda pissed that they were awesome - when everyone says a band rules, there's a part of me that wants to hate them...but they were too damn good, and I couldn't do it), and shine the spotlight on some other new Toronto bands. URBAN BLIGHT, PINK EYE, TERMINAL STATE, NUBS, BRUTAL KNIGHTS, NUBS, UNDERTONES, DIRTY BLACK SUMMER and CAREER SUICIDE are all featured, but various FUCKED UP blips, live bits and interview snippets keep this from rolling like just another ordinary mix tape. Great stuff from what could have been a great band....and they invited their friends.

Only complaint: I want to hear the KELLY CLARKSON cover start to finish please.

you must not have any more uk comps

Hey Rob.
Looking for Body Count demo circa '84.
Not the rap-band, but punk band from Lakewood. Think I saw a Myspace once.
Think they only did one demo.
Any ideas?
Cheers,
Stiener

...and here is the myspace page:
http://www.myspace.com/bodycount1983

lucky day! you can hear the whole kelly clarkson cover on this myspace page. http://www.myspace.com/fuuuuuuuuuuuuuckedup

i have a dubbed copy of the body count demo with extra live stuff if you dont have a copy email me boneyardstones@gmail.com

I don't have the Body Count demo, but that dude up there does!

Gabe - I have lots of '80s UK compilations. Enough to keep this every Friday thing going for another year or so. I know you don't really care about anything released in this century, so I promise that I'll give you your UK fix next week (even though you already have everything!)....

I'm the only person I know who also likes Fucked Up's recent output, I swear. This is great, too. The Undertones, hell yes!