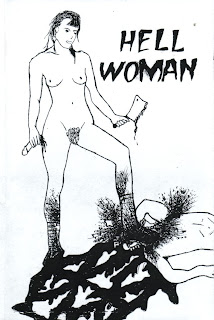 Olympia's HELL WOMAN trudge through bass heavy '90s influenced tunes that fall in line with the SMUT/LUNACHICKS world, tough they manifest as a much dirtier animal than any of those bands. Songs like "Go," "Fringe" and "Purple Corvette" enter a world I haven't heard since the demise of LOST GOAT, one of San Francisco's greatest, though HELL WOMAN is more primitive and stripped down than that comparison might imply. The recording is raw, and some of their nuances might be lost as a result, but this demo is fierce nonetheless, and packed with nods to dark '70s rock soaked in a nonsensical but wholly effective hybrid of goth ("Last"), riot grrl ("Hit") and grunge ("Bleed").

I'm not even through the second song yet, but I'm already sold. This is sweet. Thanks!

anyone got another link for this?

This is really great - thanks!!

Hello there! This is the guitarist from Hell Woman, I only have these recordings in tape form, could you re upload your MP3's for me!?

Thanks! Do you have tesseract demo from Oakland? Thanks for the great blog!