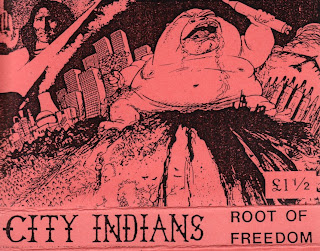 More thrash than their Spoilsport demo, and more awesome too - "Ballad Of The Dead" from that '86 demo given the treatment here, and it benefits from the revved up and motorcharged assault. S//S//C mentioned that the CITY INDIANS drummer later played for CONCRETE SOX, and that would be an obvious comparison for this recording, though I think the quiet, dark and introspectively anarcho sounding "Is Anyone Listening" steals the tape for me. 9 songs appear on this 1987 cassette, with a half hour live set from their home town of Derby on the flip side; a few glitches on the studio side, but that just makes it more punk. 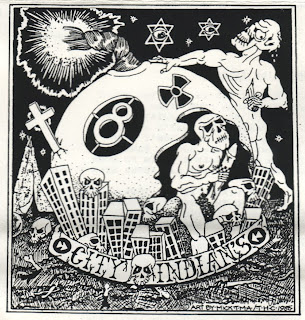 god, I used to roadie for these guys when just before and after this demo came out - they then went on a tour with Conflict in Europe - played tons of times with Conflict around the UK and we were at the Newcastle Riverside gig when there was a fight between Colin from Conflict and the Oi Polloi singer - some weird shit about how COnflict were sell outs or something

I remember a gig at the Riverside club with City Indians, Conflict and Oi Polloi, City Indians had stayed with me in Holland during the Conflict tour and I went to see them somewhere in the summer of 87 this was a few days after the punks picnic in Leeds, went to Newscastle and back to Derby with them. But I don't remember a fight there at all.

Hi there - we stayed with a person in a vege cafe in Amsterdam with sort of quick release poles on the side of the building and nitro gycerine in the fridge if you're who I'm thinking of.

Haha sorry Chris I didn't see your answer before, yes, that's me. The nytroglycerine wasn't real. We just told that to people so they wouldn't dare raid the fridge at night. Yes I remember sleeping in that blue van on your tour. It was cold! Not much else though, so many people staying at our place