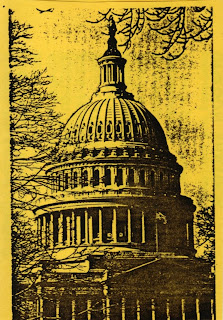 When it comes to punk in Oklahoma, Tulsa has always seemed to have their shit dialed in way better than Oklahoma City or the university towns of Stillwater and Norman.  The tradition that started with N.O.T.A., a band well worthy of any midwestern state hanging their 80s punk legacy on, continued with ILLEGITIMATE SONS OF JACKIE O and CONCEPT OF NONSENSE.  CONCEPT were fronted by Chad Malone, who was one of the first active networking DIY punks I ever met.  The first show I played outside of Norman was at his house, The Sensual Underground (also the working name for his label for many years: Sensual Underground Ministries), and he was at that point the most viscerally anti-religious and enthusiastically pro-punk person I had ever met.  After CONCEPT OF NONSENSE, Chad went on to sing for BROTHER INFERIOR (his best known and most travelled project by far), ASSEMBLY OF GOD and currently BRING DOWN THE HAMMER, but this is the shit for me: the birth of Malonecore.  There is another demo that predates this 1993 tape by a few years, a girl I had a crush on sent me a copy when I was in high school, but I've lost it long ago (hint, hint: I need a replacement).  Control is a metallic riff fest with relentless hooks, uncompromising lyrics, and a genre defining vocalist: 20 minutes of classic Okie hardcore to get you through your Sunday? Hell, yes.

Chad Malone is an excellent dude.

I'm not sure if I remember correctly, but didn't UNSOCIETY exist between the two incarnations of CONCEPT? that's how the Malonecore Chronology plays out in my head anyway.
>>Mike>>you got any SUBSANITY tapes you'd be willing to share?

I would love the Goodbye Tex comp...never had a copy at all. glad other folks appreciate this CONCEPT shit - now someone needs to pony up their first demo!!

These guys played my warehouse in richmond, va summer of 93. I still have the demo.

Hello, would you mind re-upping this??

Does ANYONE have a copy of Finally… ? I think thats the the earlier album mentioned above