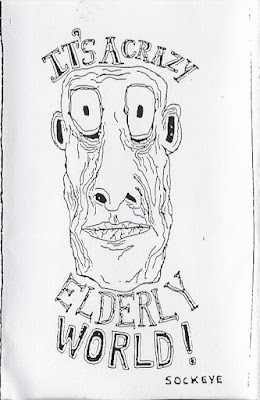 Listen to the first few tapes and think about an alternate reality - one where SOCKEYE evolves in to a raging hardcore band who tempers blazing riffs with irreverent wit. Then again...maybe that's what happened, and maybe the rest of us (still) take ourselves too seriously. 1989's It's A Crazy Elderly World features "Everyone I Know Is An Asshole," "Kill Yourself," "Messiah Sandwich" and an early version of their future hit "Sexual Retard" along with DOORS and CRASS covers. I've met the people who make these sounds - but I really want to meet the people who listen to them.

IT'S A CRAZY ELDERLY WORLD