A slice from a random Wednesday in September, thirty five years ago. The airwaves of Berkeley's KALX were teaming with wit and jams - Australian VICTIMS, DILS, a contentious debate between the station's editor/program director and the news director, MEAT PUPPETS,  JOHNNY OTIS, an R.E.M. song that I hadn't heard in over two decades....not a lot of hardcore (or even punk) on the radio that afternoon, but this is one that you can pop in and use as a vehicle for transport. To another place, if you like, or just another corner of your mind. I sometimes wonder what would happen if I removed all present day stimuli for a time and just played tapes from Pat's collection chronologically. It would take months of constant listening...and what would I be when I was finished? Would I want to come back? Would anyone recognize me if I did? 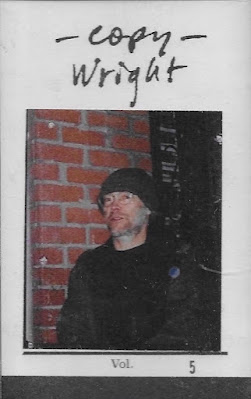 The fifth volume in the Copy Wright series has arrived - copies available soon from Iron Lung, General Speech and Sorry State. Limited quantities were available from my own little (emphasis on little) Bigcartel, but they sold out very quickly (thank you). The next three volumes are in the works and should be in hand by the end of the year.
ESCAPE CASSETTES
================= 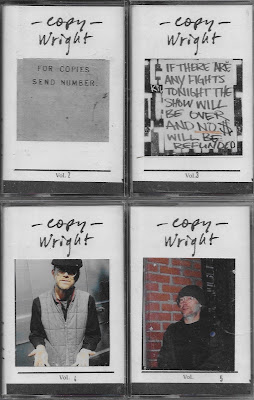