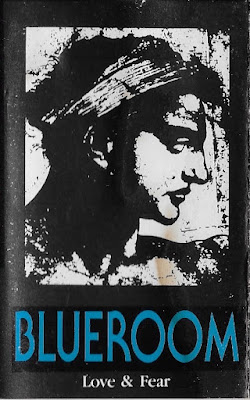 I can easily imagine going all in on BLUEROOM had I found them when Love & Fear was released in 1989 and and they probably ventured up to Norman, Oklahoma (where I moved in 1990) with some frequency because that's where the cool college/alt bands played. And BLUEROOM play cool college/alt music. You picture them with candles and shit, maybe some tapestries, flowing shirts and effects pedals...that's their sound. That sound wasn't heavy or punk enough to be grunge and they lean on blues rock as much as (or more than) the brooding goth persona they portray so they were perhaps outdated before they started, but they were also from Pauls Valley in south central Oklahoma where time and/or trends may have been somewhat skewed - though that town with a scant 6,000 residents that also gave us CARNAGE and SUBSANITY, so there's that. There's a place for BLUEROOM (or there was a place for BLUEROOM in 1989) in a far away world of guitar based dark alternative rock, and Wayne Hussey aficionados will surely find some comfort in Love & Fear...which is so say that this writer found some comfort in Love & Fear...
LOVE & FEAR

Email ThisBlogThis!Share to TwitterShare to FacebookShare to Pinterest
Labels: oklahoma

Haha! This band features my older brother Larry Standridge on guitar. I would gather my buddies and watch Blueroom rehearse and when they would finish we would attempt to play on their equipment. This went on for years as we transformed from basic punk (Tijuana Vampire, The Hoods from NY) to thrash metal (Torment, Subsanity)
In 1988 Blueroom got a last minute gig opening for Skinny Puppy at Inertia, haha they were met with a horde of pissed off goths and pinks who gobbled on the band mercilessly. It was a blast. I’ll have to write up a couple of things about Blueroom as I tagged along with them as a roadie dozens of times .

This was my older brother's(Larry Standridge) band! Ill come back and post some info and stories soon. This band was formed after Kevin Stark left the college alt rock trio The Wickers so he could be a frontman for his own band,( he was the drummer of the Wickers and Memuluks a few years before).