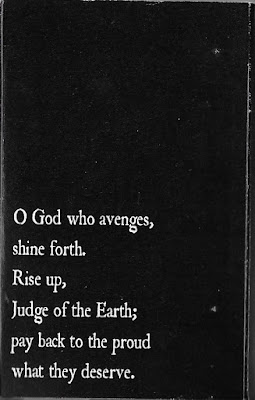 I'm not going to bother introducing THE BODY, except to say that if you haven't already been introduced then I suggest that you do so immediately. I've seen them in various incarnations over the last 15+ years, starting with a warehouse in Milwaukee's Third Ward when my friend Brad suggested that I go see some of his pals from Rhode Island. From terrifying to beautiful, their sound fills the entire spectrum, and they have made a space where they seemingly have the freedom to let the sound itself drive the creative process as they continue to deconstruct preconceptions of music.

O GOD WHO AVENGES, SHINE FORTH.
RISE UP, JUDGE OF THE EARTH;
PAY BACK THE PROUD WHAT THEY DESERVE.
Posted by the wizard at 8:25 AM

You accidentally posted the Escape Is Terminal download link to this post (Hüsker Dü) ... not that I mind, though.

WHOOPS. It happens, and I appreciate the heads up. Rectified. Onward.