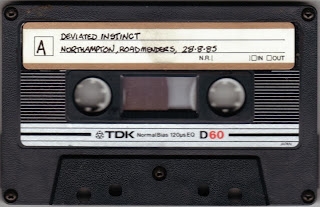 A twelve song live set that was recorded a month before the 1985 demo I posted back in February. No introduction or explanation really required, DEVIATED INSTINCT were fucking ace. In late 1985, Mid says the band was "still very much finding our feet," but this live set sounds like anything but a band finding their footing. If there were a designated genre for Filthy Anarcho Crust, then I would put DEVIATED INSTINCT at the top of the tree...I'm looking forward to seeing them in September.

awesome,
looking forward to this. One of my fave bands of my youth ha ha.