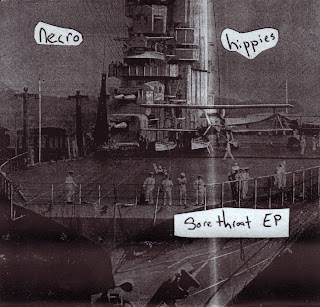 NECRO HIPPIES are from New Orleans, and my pal Layla started raving about them a few months back. She played me their 12" and I thought it was pretty fukkn rad, and when they announced a gig in San Francisco, I was pretty stoked. I couldn't really tell if I was stoked to see NECRO HIPPIES or just stoked to see Layla flip her lid cause she was so damn excited about the show. If a band is good, then they are gonna be even better at Thrillhouse Records, and since that's where the show was, I figured we were all in for a pretty sweet evening. I didn't really hang out with them, just said hello and such, probably heckled just a little bit more than would normally be considered friendly, I just watched them fucking kill it. NECRO HIPPIES played like I remember playing when your band is young and you booked a tour that might have been a little too long for your sanity, your wallets, and your relationships with the other people in the van, but then there's a shitty room and it's rammed with dirty punks and that's why you got into the van 6 weeks ago when you still had your positive outlook - you did it all for nights like this. That's how NECRO HIPPIES played, they were fukkn great, and I even trekked across the bridge to see them in Oakland the next day (good show, RANK/XEROX were awesome, but it was more...sterile than the night before). I still didn't really hang out with them there either, just passed along a few awkward "I like your band" comments that still leave my mouth like a dumfounded teenager even though I'm pushing 40 and it's getting lighter every year...but I just felt like they were good damn folks, and that goes a long way with me. It doesn't hurt that the band serves up bare bones ultra catchy snotty American hardcore with a laid back attitude, and that the songs are in your face KBD worthy US punk put through a "fuck you" filter and then pissed all over.  No...that doesn't hurt at all.

Fast forward a few weeks and I saw the guitarist in Austin. We still didn't hang out, and I felt less urge to pass along "I like your band" comments since her band wasn't playing. We passed each other on Red River, I was headed from my total score of a parking space to watch Jerry A take a squishy dump all over whatever shred of a reputation POISON IDEA still manages to hold onto, and she gave me this tape.  A 2008 EP recorded "on a dumpstered boombox." I challenge you to get more punk than that.