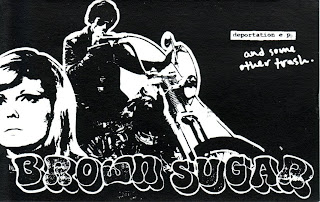 One of the things I miss about living in the Midwest is being able to hit the Eastern Seaboard and the Rust Belt on quick, no bullshit touring jaunts to see the great bands and hang out with the great people that reside in those regions. Albany, Pittsburgh, Buffalo, Baltimore, the Tri-Valley, Grand Rapids and the list goes on...I was lucky to hit them all repeatedly and get my face melted by killer bands over and over (of course now I can do the same thing with Southern California and the overly prolific Pacific Northwest, I'm just crying a little "grass is greener" river). The whole point is that if I still lived in the Milwaukee, then I probably would have seen BROWN SUGAR by now, and I bet they would have been awesome. Buffalo has been packed with a disproportionate number of rippers for as long as I can remember (it's the winter and the desperation all twisted into a frustrated heap), and these folks are veterans of the city's rock and roll world. This tape compiles their 2008 Deportation single with a live set recorded in Syracuse (they named the track "Gushy & Wet in Akron Corfu," but it wasn't recorded in Ohio - go figure) one living room demo track and a confusing cover of "Hey Joe" which Biff says is done in the LOVE style but it comes off sounding like BIG STAR (this isn't bad, just not the tune I would have opened my tape with).  The EP tracks are tough as shit without ever coming off as macho, just raging punk rock with one ever present clean guitar that seems to be hanging out by itself while the rest of the band blow through 8 songs in 9 minutes. Tight as shit, this is perfect fodder for fans of No Way stuff or the first few TOTAL FURY records...come to think of it, that clean guitar sound exactly like the TOTAL FURY Spring Thrash single from a decade ago, though this was likely an accident (yeah right).

DEPORTATION
and some other trash

I have the single and wanted to hear the other stuff on the tape. thanks for a great upload.

Akron and Corfu are both towns in New York (in the southern tier if memory serves) and if google can be counted on they might even share a "pennysaver" newpaper. I am Western New York native, and a nerd, so I had to jump in here...good band, excited about this download.

Yeah...Biff just chastised me via text for not knowing that the Akron/Corfu exit was between Buffalo and Rochester. I haven't been to Rochester in at least 15 years though (the usual route was Boston/Providence - Buffalo - Niagara Falls - that go kart place just south of Niagara Falls where I got free rides once because they thought we were a part of a 10 years old's birthday party - Pittsburgh) so I think I should be forgiven since I don't start paying attention to signs until I get off the NY Thruway in Buffalo...and even then I only barely pay attention to anything.

hey man, all i said was i thought you were a man of the world....

That live was recorded by me in the attic of the now defunct Castle Rockmoore house venue in Syracuse. It was something that I was hoping to do for more shows, but bands never wanted to sound check, causing most of my archives from that era to sound way more rough.
I do have a handful of other decent sounding sets though, if anyone were interested in trades or anything.