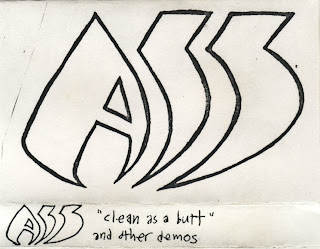 I could go on about ASS for hours, but I'll try to keep it relatively short. Early 1990s I started touring, and on my second tour we played a dreadful show in Kent, Ohio. The gig was horrific, but we were on tour so we probably thought it was amazing, but we did meet some nice folks (and that's really the whole point anyway). The next year when MULTIPLE CHOICE hit the road, we stopped by Kent once again. The show was at the same venue/gallery/hovel as the year before, but this time the show was fucking great, and Kent became a regular stop until that band stopped touring in 1997. Kent is most famous for one legendary act of excessive force in 1970, but for us it was all about these killer folks we were hanging out with and the great music they shared with us. I didn't yet know about "lo fi" music, but these dudes personified it, and we left Kent each year with more tapes of incomprehensible nonsense. SOCKEYE (actually from Stow, Ohio - the next town over) were at the epicenter of all of the noise, and they spawned bands like HORNS, BOY IN LOVE, and today's featured "artist": ASS. Should you choose to download (and I'm certain that most of you won't) you will be assaulted with 44 minutes of the most ridiculous bullshit you have ever heard...in three acts. ACT I features the band playing live in Kent, probably at that shithole that had cheap beer right across from where we always played, then the live recording moves to the sidewalk, and the "engineers" interview some young passersby while ASS continues the assault inside, like a noise beacon through the cigarette fog. ACT II is ten tracks that are the very embodiment of noisecore: few notes, few instruments, just bizarre and unlistenable chaos. And then ACT III is like the chill out after you've gotten all worked up...22 minutes of ambient noise interrupted periodically by disco hits from the '70s and infomercials. This tape has annoyed so many of my friends over the last 15 years, and I'm happy to add my Terminal Escape readers to that list. Listen at your own risk, but please listen.

"CLEAN AS A BUTT"
and other demos

CAN'T WAIT TO FRY MY BRAIN ON SOME ASS!

Awesome. Can't wait to listen to this one.