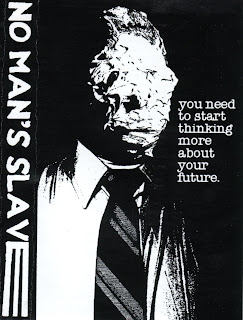 The two best things about going on tour are seeing people you like and seeing bands you like.  Luckily, a few weeks back I managed to take care of both of those things at once when NO MAN'S SLAVE played with us in Oklahoma City. They have honed their craft to a frighteningly sharp point, and these dudes have reached a level where it's not out of line to mention their name in the same breath as the band from whom NO MAN'S SLAVE lifted their moniker. The bass break in "Curbing Homophobia" has shades of LOGICAL NONSENSE, the guitar work screams IRON LUNG in the best possible way, but the overall delivery here is just plain brutal. 29 tunes in under 22 minutes, I think you know what's in store.

The singer from this band runs the not-updated-often-enough-but-still-totally-excellent Trapped In Oklahoma blog, and is responsible for a few of the Oklahoma posts that have appeared here as well. For those who feel the need to keep track, these tunes appeared previously on the Siege Mentality EP and the split EP with I RESIGN (both on Give Praise Records), the Ear Damage cassette and their self titled cassette from 2008.

Been listening to this tape a lot this week and it fucking SLAYS. In fact, I tracked down purchasing information for it today and found that it was limited to 100 and has long since sold out. Bummer! Wish I'd spent more time with it back when you first posted it, so that maybe it still would have been in print when I went looking for it. Ohhh well.

Thanks for posting this tape. It rules, awesome band too!
Just so ya know this has been a favorite blog of mine for a while, the idea of ripping tapes is awesome.
Thanks for doing this blog

You down to re-upload this man?
-Jacob