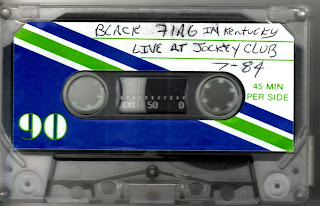 I know that the historical importance of BLACK FLAG and their approach to music cannot be understated. I know that BLACK FLAG's contribution to American punk and hardcore was immeasurable. I know BLACK FLAG are likely the most enduring hardcore band to come out of the 80s. And I think BLACK FLAG are totally overrated. Their 8 hours rehearsals are legendary, but I have to think that the result of endless time locked in a room together (and together with Rollins, no less) was uninspired performances like the one featured here. After a 12 minute instrumental that must have bored the Newport, Kentucky audience to fucking tears in 1984 (the most groundbreaking thing FLAG did was Process Of Weeding Out; there were plenty of bands making equally ferocious music in the late 70s/early 80s, and not as dumbed down as BLACK FLAG were either, it's just that BLACK FLAG took their show on the road...a lot), Ginn launches into a tired delivery of a brilliantly simple riff, and "Nervous Breakdown" has never sounded so dull. A version of My War's "Can't Decide" completely devoid of any enthusiasm follows (My War was the first BLACK FLAG I ever heard...I gave the record to a friend before side A was even over), but then "Slip It In" sounds good and it seems that 20 minutes  into the set these dudes are finally hitting their stride. I always appreciated the sentiment behind "Black Coffee," but the tune falls flat on vinyl, and this rendition does little to revive the song...or the set. Rollins' presence is vapid throughout, and the 20-30 second lag between songs makes me think that the band were just as bored as he was. By this point in their career, they feel (live and recorded) like they are just going through the motions, appeasing the fans that pay their bills while Greg Ginn was suppressing the inner monster that would go on the make Process Of Weeding Out and form GONE after BLACK FLAG's demise. I can't deny the fury of tunes like "My War" (probably the best song on this tape), and bringing hardcore to the country at large is an admirable legacy, to be sure. However, memories of yourself as a frustrated teenagers blasting these jams on your Walkman on the way to get your ass kicked (again) at school aside, three years into the Rollins era and BLACK FLAG had lost nearly all of their zeal, and perhaps even most of their relevance.

I understand that any dismissal of BLACK FLAG places me in a very small minority, and I'd like to stress that I don't hate, or even dislike them, I just think that an inordinate amount of historical attention gets directed at a band who released a couple of killer records and then languished in a "what the fuck are we doing" limbo for a few years too long, fronted by a seemingly self absorbed choad who has made a career out of his stint in the band. There's decent footage of this show on youtube, pretty easy to track down if you want a visual aid. Admittedly the quality of this live recording leaves a bit to be desired, but like I've said already, so does the performance.
- June 21, 2010

I am guessing having grown up listening to the later BF records but never seeing them live allows me to enjoy without the baggage. I really have little use for any of the records before My War and it is only on a rare occasion that I will listen to them at all anymore. When I do, however, I just close my eyes and revel in the memories of what I was doing when I used to listen to BF. Thanks!

The reality is - you're pretty much on the money. People tend to forget that a lot of momentum was lost between 'Damaged' and 'My War' - the worst being that 'My War' wasn't recorded by their most brutal line up - Duke on bass, Biscuits on drums, Dez on rhythm guitar, Ginn on lead guitar, and Rollins on vocals. Dez is my favorite BF vocalist, but this line up, as heard on the '82 demos, fucking SLAYED. The 'My War'/'Slip It In' material is rabid like 'Damaged' is rabid.

But that didn't happen. Around the time of 'Slip', it seems like there was a division in aims between Ginn who, for better of worse, wanted to constantly go in new directions, and the rest of the group who wanted to make a career out of it ('letting fans catch up' as they put it).

At the end, the band were almost a 'college rock' act - entire sets were low volume, mid-tempo, near distortion free snoozefests.

That said, 'My War' will always have a place in my heart by virtue of introducing my to hardcore.

Hi, do you mind re-upload this.
Thanks

Sorry i recheck later,and the link is alive. Thanks for your efforts.