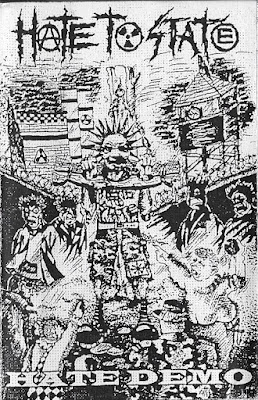 Belarusian anarcho crusters HATE TO STATE dropped a demo in the late 1990s that bent time and space - clenching first wave Eastern European punk, mid '80s UK stench/crust and '90s North American DIY hardcore all together into a ruthless fist. On the one hand, fans of MANKIND?, DISRUPT, RESIST and associated outfits will need no convincing - power is power and context be damned. On the other hand, think about Belarus in the 1990s as the USSR disintegrated and left a void simultaneously filled by Lukashenko's fist and HATE TO STATE. The sociopolitical realities of activist punk in regions with access to "western" influences while hamstrung by the limitations (and oppressions) of "eastern" governments is a piece for a different time (and a different writer), but it puts "Cold, Hunger, Wind, Death" in a different context than if it was some band from Michigan, you know? Who noticed HATE TO STATE? That's a deeper question, but I'm just here to remind you that it happened...and that it was fucking powerful.  This regurgitated copy (on the flip side of the YOUR KINGDOM IS DOOMED tape) has the full demo plus nineteen uncredited tracks from two different sessions without femme vocalist Stasya - the recording on these song is more punk and less hardcore, but the second vocals are definitely missed). No idea where those extra songs come from, but it makes me wonder if there is even more out there...somewhere.
HATE DEMO
- December 01, 2022

thanx for this one!.. didn't know for the band before and they have this classic east european or ex-yu sound of that time and they are awesome.. they are, kind of, like rawer and filthier Antiglobalizator, also from Belarus..

Great simply and punchy crusty-punk from Belarus. I bought this tape in one Czech distro over 20 years ago. http://muzika-komunika.blogspot.com/2013/05/hate-to-state-hate-demo-1998.html. It is also on the YouTube yet.