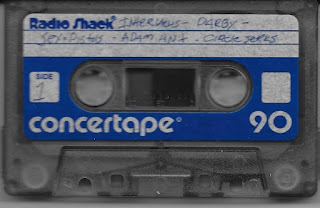 On this side:
• Darby Crash interviewed after the release of the GERMS LP.
• Adam Ant talking about CIRCLE JERKS and reading lyrics to a couple of songs from Group Sex.
• CIRCLE JERKS talking about rock 'n roll and punk...it get's really good just after the 2:00 mark.
• Sid Vicious (and a little bloated carrot top) interviewed by Rodney Bingenheimer on KROQ, supposedly Sid's first interview as a member of SEX PISTOLS.
===
There's a pretty hot BLACK FLAG set from 1982 on the other side. Hats off to the punk who put this together and to the next punk who passed it on instead when they were finished with it instead of throwing it away. Tape trading rules.
DARBY CRASH • ADAM ANT • CIRCLE JERKS • SID VICIOUS
- November 25, 2022