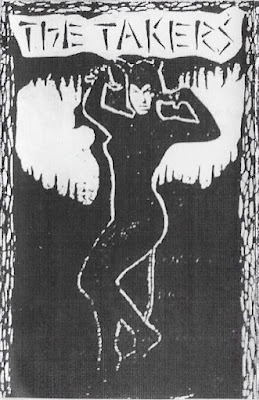 GRIMPLE's influence on small(er) scene punk bands in the '90s cannot be understated. Some might hear THE TAKERS and assume the band fed themselves a steady diet of F.Y.P., but I never liked that band (still don't) so I'm gonna stick with the GRIMPLE thought. Full of the kind of hooks that that get stuck under your skin, but you can't call it pop punk because it's pop punk. It's not snotty or whiny - it's fucking pissed. And if you lived in Edmond in 1996 then you'd have probably been pissed too. Thanks for this one, Ross.

THE TAKERS
Posted by the wizard at 9:33 AM