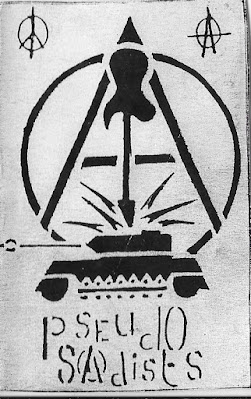 I picked up a box of mostly Welsh tapes from my mate Tim a while back. I resisted the urge to devour all of them at once, instead opting to ration them out over time....and I still get butterflies each time I reach inside to grab a new one. Like many (most) of the bands in the box, PSEUDO SADISTS were from Wales (Swansea) and like most (all) of the bands in the box, their lone demo is an absolute scorcher. Primitive and fiery UK punk - just four kids who had done time in PAY DAY and THE NOISE before joining forces in 1981. According to Tim's source, they played just a handful of gigs, their singer may or may not have been missing his two front teeth and was "mad as fuck," and had called it quits by '82. All of these songs have been comped either then - Oppose Or Decompose, Bullshit Detector, A Country Fit For Heroes - or later on the (essential) Bullsheep Detector comp/s. And that....that paragraph and this eight song demo is all you get.