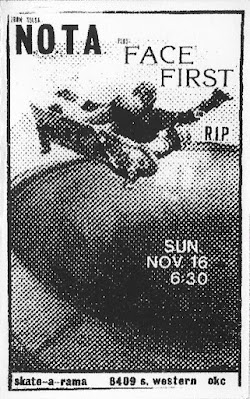 Really, I should be posting this on Escape Is Terminal because it's a live recording. But y'all don't look at that shit so I'm gonna put it on The Main Stage. The title says it all, pretty much: on a November evening in 1986, there was a pretty stunning gig at Skate-A-Rama in Oklahoma City, Oklahoma and it was captured by someone in the audience. The recording is thin, and pretty rough in places, but it's all there...and it rules. Only three tracks from the FACE FIRST set (including "Little Man" from their near perfect self titled EP) who were on fire at that show. Four blasts of high energy CRYPTIC SLAUGHTER-esque thrash from R.I.P., possibly the only recording of this band that survived the decade. But of course you're still reading this because of the headliner. Tulsa's N.O.T.A. are easily Oklahoma's most notable hardcore export, and they are so fucking fast here that it hurts. Recorded just before they split up (the first time) with a lineup that featured Dave Scum (who had been associated with or friends with the band for years) on vocals while Jeff played guitar. Original guitarist Russel had left the band by this point and they had a replacement bassist as well, so it's a maybe a bit of a scab version of N.O.T.A., but holy shit this set is fast. Scum's vocals give tracks like "Police Front" a kick in the ass, and some of the shit is so fast it's barely recognizable....a studio recording with this lineup would have been a welcome gift to late '80s hardcore. Six cuts, interrupted by a fight. Because of course.

LIVE AT SKATE-A-RAMA
Posted by the wizard at 8:08 AM