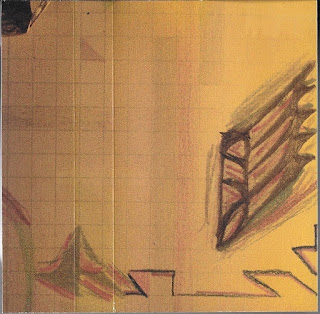 Throughout the late '00s, the Peasant Magik label released a steady stream of (at least) interesting) and (often) excellent experimental and/or dark ambient tapes. There's not really a through line with the sounds or the artists, though there are several releases tied to PILLARS OF HEAVEN, but virtually everything I've come across is worth picking up...like CHRISTIAN SCIENCE MINOTAUR's Map 3 (of 9), the third (obviously) release in a four tape (not quite as obviously) series. The drones are sometimes anxious and awkward, sometimes ominous, and "Tashtego (A)/(B)" spans the two sides of the tape sneaking subtle programmed beats and manipulated instrumentation underneath the surface before "Queenqueg" closes the tape like you're just out of range of a radio station broadcasting (important) messages from other worlds. Though it runs just 25 minutes, Map 3 settles in so effectively that I feel an absence that I can't quite define when it runs its course...as if the sounds are just supposed to be there. And then they aren't.