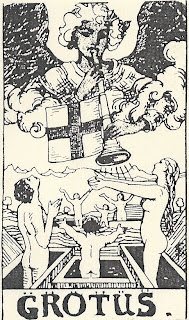 I feel like GROTUS came a few years too late. The whole industrial/electronic thing was passé to even casual listeners by the time this band started cranking out excellent records that I feel like were in dollar bins basically from the day of their release. But this Bay Area outfit were head and shoulders above most of their predecessors, and with this four song slab as an introductory demo, you know that they were on a mission. Critics and other musicians fawned over them (I often read their name mentioned alongside NEUROSIS and CONSOLIDATED, and I think that pretty accurately describes their approach, but with a lyrical wit rooted in DEAD KENNEDYS' irreverent and sarcastic punk), and when I moved to SF they were one of the bands poised to make a move to the big time. They didn't. The internet tells me that they toured with KORN in 1995, and listen to "Daisy Chain" from this demo and you might wonder who was an influence upon whom, just like their addition to the Alternative Tentacles roster while Biafra was focusing on LARD makes perfect sense. But after a few records and a quick dip into the major label pool...GROTUS faded. The tracks from this demo later appeared on their 1991 full length Brown, but you should start here.
GROTUS
Posted by the wizard at 4:30 AM